Located in the rainforests on the eastern coast of the Andes in Ecuador, Cuevo de los Tayos is an extensive cave system that appears to be man-made.
Father Carlos Crespi (born in 1891 in Italy, died in 1982 in Ecuado) lived in Ecuador. Crespi came upon artifacts from the indigenous people in Ecuador. These people claimed they came from a massive cavern system.

There has been a lot of speculation about whether the artifacts were genuine or not. As they are not around to be studied any longer, many believe they were shipped off to the Vatican (likely).

The degree of artisanship seems to vary wildly so I have to wonder if some of the local indigenous people might have attempted to add art to the collection.

The Ecuadorians have legends of giants there long ago. In fact, a recently found pyramid in the jungles is being touted as the City of the Giants. There is much talk even today of a past culture of giants within the cave systems. At the pyramid site, giant tools were discovered that seem too ungainly for a regular human to use. 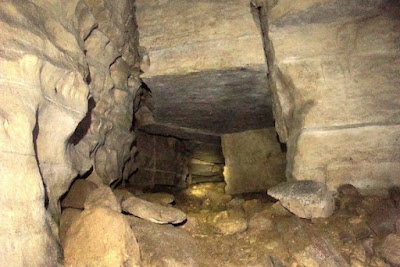 The finds presented to Father Crespi were extraordinary. It is a good thing that they were documented with photographs, but truly a sad thing as, even though they likely weren’t of the local indigenous people’s origins, these Shuar people were the guadians of the cave (known as the metallic library) and considered it a place of spiritual practice. As these items came from their homeland, they all should reside in a museum there.

Source: Scattered around the area were a great many artifacts of stone and of pottery (seemingly now all stolen in recent months). Many of these objects appeared to be stone tools that could have been used either in mining or refining some kind of metal ore. Amongst these tools are some that would be extremely difficult for a normal size human being to use in any practical fashion, this has led to a strong suspicion that this is one of the legendary lost cities of the giants, well known in local Ecuadorian legends about the Amazonian area, such places generate great fear among the members of today’s jungle tribes as they are believed to be protected either by spirit guardians or by beings not of this world. Many explorers have gone into the jungles around this area and failed to return – it is certainly known to be dangerous to enter for the foolhardy traveller. Even the most expert explorers have vanished without trace in the hunt for lost cities and the supposed existence of immense treasures to be found.

What can we glean from Father Crespi’s reveals? That there was an ancient culture in Ecador that utilized giant caves beneath the slopes of the Andes and made extensive tools and art, valuing gold especially. Who were these people?

Local legends by the very tribe that guarded the cave find and realized its importance should tells us, it could very well be the ancient giant culture found around the world with advanced technologies in very ancient times.

Southwest Style is HOT and Here’s Why!